All images on this website are copyrighted by the artist. No image or portion of any image may be copied or used without the express written permission of the artist. To purchase artwork, or to subscribe to my mailing list, click here.

Naomi (Fiehler) Aho was born in Schenectady, NY in 1956. A "pastor's kid", she lived in many locations growing up, including Long Island, New Jersey, and Connecticut. She moved to Warren, Maine in 1986 with her husband and children, which they still happily consider home.

Naomi returned to drawing after a 23 year career in elementary education. She is represented by Landing Gallery of Rockland, ME. Her work has been selected for juried shows in Maine, Vermont, New York, Illinois, New Mexico, and Connecticut. She has been published in International Artist's Magazine, and in two colored-pencil webmagazines. 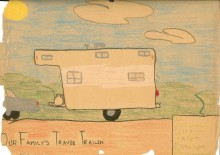 One of my earliest drawings, from 1965, of our family's camper... the love affair with pencils begins!

Why I do it: I am constantly amazed at all that can be discovered through the close observation of nature. While I am awed by and appreciate majestic vistas on a grand scale, my utmost delight is found in the smallest details-more intimate landscapes, as it were. I consider it a privilege to faithfully render the exquisite minutiae of my favorite subjects in order to convey the remarkable variety and incomparable splendor of God's creation. Soli Deo Gloria!

I am like a little pencil in God's hand.
He does the thinking. He does the writing.
The pencil has nothing to do with it.
~Mother Theresa

What I do: I love the line. Sometimes I am stopped in my tracks by the beauty, elegance, or confidence of a line or contour of an object. After years of experimenting with other mediums, I returned to drawing and found it a perfect fit. Working with pencil, whether colored or graphite, allows me to render those lines and contours which become drawings rich with layered color, value, and the dramatic interplay of light and shadow.

God's eternal character and power cannot be seen. But, from the beginning of creation, God has shown what these are like by all He has made.
~Romans 1:20 (CEV)